The Skyhawk is a rear wheel drive vehicle with a live rear axle design. Throughout its production, the H-body Skyhawk would be offered only with the Buick-designed 3.8 liter (231 cid) V6 engine using a 2-barrel carburetor that generated 110 hp at 4000 rpm. A 4-speed manual transmission was standard; a 3-speed automatic was offered as an option. The front suspension is short and long control arms with coil springs, and anti-roll bar; the rear suspension is a Torque-arm design with coil springs and an anti-roll bar. Variable-ratio power steering was standard of a recirculating ball design. The brake system features front disc brakes, rear drum brakes and standard power assist. The Skyhawk has a 97-inch wheelbase and a 65.4 inch width.The hatchback body style is noted for having a resemblance to the Ferrari 365 GTC/4. The Skyhawk, Chevrolet Monza, and Oldsmobile Starfire were among the first vehicles to adopt the newly approved rectangular headlamps.

In 1975 the only unique option for the Buick Skyhawk was the roof crown molding (aka Targa Band).  245 Skyhawks were produced in 1975 with this option.

Starting with the 1976 models the front disc rotors were of the vented type and a new five-speed manual transmission was optional.  New options included the Astroroof, which was a large heavily tinted overhead glass roof combined with a wide aluminum targa band that extended from one B-pillar across the roof to the opposite B-pillar. In 1976 a conventional sliding sunroof became optional and was not available with the aluminum targa band.  Two decal packages were available the Hawk Accent and Free Spirit.  The Free Spirit Skyhawk for 1976 had the same vari color decals, red wheels and pewter gray exterior color as the Buick pace car for the Indianapolis 500.

1977 the front nose changed with an ice cube tray grill between the headlights and this remained for 1978.  The Hawk Accent and Free Spirit decal packages remained for 1977 but the Free Spirit decals were now either black or white in color.  For 1977 a new decal package was available and this Skyhawk was called the NightHawk.  Black exterior color with black decals that reflected gold in color at night when light was shined on them.  1977 was the only year for the H body Buick NightHawk.

1978 the only decal package offered was the Hawk Accent.  For the three years this package was offered the decals were available in three colors.  Black, White or Gold, this package included stripes around the side windows, wheel openings and hood.  Also there were Hawk decals on the fenders and one on the hatch.

For the 1979 model year, the Skyhawk received a face lift that incorporated single rectangular headlamps replacing the dual rectangular headlamps that all previous models used. A new option was the Road Hawk package that included a Rallye ride and handling package consisting of larger front and rear stabilizer bars, larger tires, and special interior and exterior trim. There was also a Skyhawk Designers’ Accent Edition that had a two tone exterior paint with black at the bottom and either red or yellow for the top.  It included the 1977 to 1979 Chevrolet Monza rear spoiler and front air dam and a Hawk decal in the center of the hood.

There were few changes for the 1980 model; most notably was the discontinuance of the optional five-speed manual transmission. Only the four-speed manual and three-speed automatic transmissions were offered for 1980.
H-body Skyhawk and Starfire production ceased on December 21, 1979, to allow for an increased production of Chevrolet Monzas and Pontiac Sunbirds. A total of 125,311 H-body Skyhawks were produced in six model years.

The H-body lines were replaced in the spring of 1981 with new front-wheel drive compact cars built on General Motors’ J-body platform including 2 and 4-door sedans, a 2-door hatchback coupe, and 4-door station wagon. 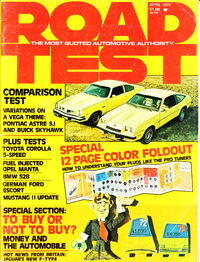 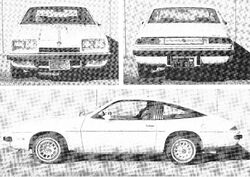 Road Test April 1975, "Varations On A Vega Theme"—The Chevrolet Vega (Pontiac Astre) and Monza (Buick Skyhawk) meet head to head in GM's marketplace...which will win?—Chevrolet Vegas are everywhere; like the Volkswagen Beetle or the Model T, they have become cult cars, accounting for a very large slice of the domestic small-car market pie." "Introduced to the American consumer in the fall of 1970, the car has undergone substantial changes, but even in last year's confused market situation, it was obvious that a new configuration was necessary to fill the up-market needs of the potential Vega buyer who was less than enthusiastic about the car's basic styling and appointments. The result was the Monza, which uses a slick body and Vega mechanical components to create its image. General Motors, recognizing a real trend in the falling sales of big cars, then decided to use the Vega/Monza concept to its fullest and and market a small car in three of its divisions based on either the Vega or the Monza, creating the Oldsmobile Starfire and Buick Skyhawk. To the extent that the progeninitor of the lot is the Vega, they are all variations on its theme, and since none of the B-O-P boys market a Monza-car and a Vega-car, we decided that a comparison test was in order."
Buick Skyhawk
"The Skyhawk manages to eliminate a few of the more objectionable points of the Monza, but not without some tradeouts on the other side. The interior and exterior, although almost mirror-images of the Monza, have been tweaked a little to suit the up-market Buick postion." "Mechanically, the only real difference between the Monza and the Skyhawk is the engine. Whereas the Monza gets the Vega four-banger or a 262 cid V-8, the Skyhawk has only one available engine, the 231 cid V-6." "The Skyhawk is also lighter than the Monza, although it is over 300 pounds heavier than the Astre. Comparing the Monza and Skyhawk, we think that the Skyhawk, at 3020 pounds is a much better handler than its Chevy brother, even with every suspension element being identical."
"The Astre and Skyhawk are both hard cars to dislike, dispite the complaints we had about both of them. They had greatly disparate performance due to their vasty different engines, but both had about the same braking and handling figures, as well as people and cargo capacity. The level of finish and overall quality was about equal in both, so inevitably, the final decision—which is best?—must come down to subjective considerations. And here, despite the $400 price difference, we had to come down on the Skyhawk's side." "If basic parts of the old Vega theme—economy, contemporary styling and sportiness in a small package—are to be carried into the mercurial market of the late 70s, there is no doubt in our minds that the Skyhawk is a variation that can handle the job."