Exerpts from internet articles and blogs

Jalopnik March 6, 2013 said, "The Joke Behind Mad Men's New Secret Chevy Account" said, "Mad Men, aside from being a fascinating look at how booze-soaked office jobs used to be, also frequently provides some compelling views into automotive history, as seen through the lens of advertising. This week's episode referenced a new Chevy project called the XP-887 project. We know it as the Vega." "This is one of those cases where we get to laugh at the chumps in the past because we know better by virtue of being born more recently. But it's interesting to think about the unnamed-Vega as it was not-known then: a technological leap for GM, incorporating GM's first all cast-aluminum engine." "This was big news for GM at the time, and everything about the project was out of the ordinary for the General. It was a small team, headed by the vehicle's chief engineer, with the goal of developing the car in a rapid two years. The end result was a car that, on paper, still seems pretty exciting today: a small RWD two-door sedan, or, even better, a two-door wagon they called the Kammback. It had an OHC aluminum engine block, was cheap, and looked, at least in the first generation, great. I'm a sucker for that fish-mouth grille bisected by the thin bumper blade." "So, as you watch upcoming Mad Men episodes, be sure to enjoy the schadenfreude of knowing that this absolutely crucial account is ultimately doomed."

ClunkerNation May 5, 2013 "Mad Men and the GM XP-887" Craig Fitzgerald said, "If you’re a Mad Men viewer interested in learning about the iceberg approaching the Titanic, you probably want to stop reading now. The car that Sterling Cooper Pryce Draper has a chance to work on is the XP-887, otherwise known as the Chevrolet Vega and the Pontiac Astre. It set GM on a different development path, and put the chief engineer in charge of the entire program. Everything from the OHC alloy block to the electrophoretic paint process to the train cars it would be shipped on was new. It’s going to be interesting to see where this leads the agency. The XP-887 was awaited breathlessly, and it was a standout sales success in the early stages. It wasn’t until 1972 that it all went wrong."
One Response to Mad Men and the GM XP-887 Robert Spinello says: May 12, 2013
"GM’s first U.S. mini-car cost $200 million to design and bring to production. In today’s money that’s over a billion dollars. It wasn’t by chance the Vega out-handled more expensive european sport sedans. AMC in contrast, spent all of 5 million to convert an existing Hornet compact into the Gremlin, selling it for about the same price as the Vega which was new from the ground up, sharing nothing with existing vehicles. The 1971 Vega was just $2090. No other car company in the world was able to invest hundreds of millions of dollars on a vehicle to sell at that price, and GM made little or no profit on the Vega which was usually ordered with few options (GM’s profits came from expensive options). But in a rush to bring the car to market, numerous piecemeal “fixes” were performed by dealers and Chevrolet’s “bright star”, received an enduring black eye despite a continuing development program which eventually alleviated most of these initial shortcomings. By 1976, the car had received five years of improvements (300 new part numbers in ’76 alone) with a refined, durable automobile the result." 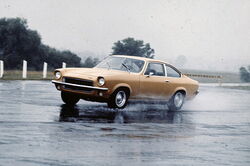 The Wall Street Journal May 10, 2013 said, "Chevy Vega: Bad for GM, Good for ‘Mad Men’?" said, "Car people might see the latest automotive plot in AMC’s “Mad Men” as tragedy, or at least dark comedy. But it might be closer to epic. In the last episode Don Draper is trying to land an account with Chevrolet to promote its next “top-secret car,” the XP-887. Serious car nerds — or anyone with an Internet connection and the will to use it – recognize that as the name of a real-world prototype that became the Chevy Vega compact car. Though named for a bright star, the Vega fell far short of stellar in just about every mechanically measure." "Chevrolet sold hundreds of thousands of them in nearly every model year from 1971 through 1977 – a total of about 2 million." "For an advertising firm like Sterling Cooper Draper Pryce, the Vega would have been a gold mine potentially worth the risks the shows characters are taking to get the business. Compared with Jaguar, the fictional firm’s previous big auto account last year’s big car account, Chevrolet was a giant that in real life sold more Vegas in a few months than all the E-Type Jaguars sold in more than a decade of production. Will the car play a big role in future episodes? Will we get to see the XP-877 – perhaps as a clay model in GM’s Warren, Mich., design center (which, by the way, already looks like a mid-20th Century set)? Will Don Draper cruise around town in a puny Vega the way he did in the sleek, sexy Jaguar?" "Let’s do some car-spotting on Sunday." 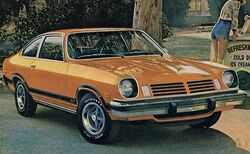 Larry Gross Online "May 19 2013, “Mad Men, the Chevy Vega and Me" said, "I’m a fan of the television show “Mad Men,” but it usually takes me a while to get around to watching it. That’s just how I am. I’m on the current season, but haven’t yet watched the show when Don Draper’s advertising agency lands the Chevy account. What I know about that episode is that Don and company do indeed land the account for the Chevy XP-887. Oh yeah. I remember that model very well. That’s really the Chevy Vega. The Chevy Vega was the first new car I ever owned. Growing up in Indiana, I bought the car from a dealer in Friendship—from a dealer that my father bought cars from all his life. If I remember correctly, I purchased the 1975 model. No, it’s not the one in the photo. My Vega was silver in color. Vegas became known as lemons. But not my Vega. In the three plus years I owned it; I never once had any problems with it at all. It never burned oil, never broke down and never developed rust. It was a perfect car for me. The only reason I needed to sell it was because I was getting married. My soon-to-be wife had a newer car, we didn’t need two and I could sell the Vega and make a little money. That was easier said than done. I think I took it to every GM dealer in Cincinnati. When I would mention I had a Chevy Vega I wanted to sell, people working for those dealerships would almost run away from me. They wanted no part of it. I needed up selling my Vega to a guy who had just moved to America. He wasn’t aware of how bad the Vega name was. Maybe the name was bad, but my Vega was just fine. It will be interesting to see how the Chevy Vega plays out in the upcoming episodes of “Mad Men.” It was a decent car for me, but somehow, I don’t see Don Draper ever driving one." 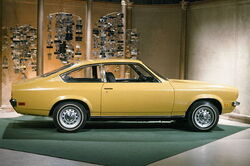 The Wall Street Journal May 20, 2013 ‘Mad Men’ and Chevy: Is Don Draper Channeling James Hartzell? "In this week’s installment of AMC’s “Mad Men” Don Draper obsesses over the firm’s advertising work for Chevrolet as the company prepares to launch a car known internally as the XP-887. We know it today as the Chevy Vega, and many critics consider in it one of the worst cars that ever rolled down an assembly line. But in the context of the late 1960s when it was under development, the Vega was a big deal and Draper has big ideas for how to promote it. He suggests the advertising theme he is working is about more than simply hawking cars. Is he talking about selling the brand as a lifestyle? As an identity? “It’s way bigger than a car,” he said. “It’s everything.” Is he talking about “Baseball, hot dogs, apple pie and Chevrolet?” That memorable theme was the real-world work of ad copywriter James Hartzell in 1974, when the Vega was a strong seller and Chevrolet was still a dominant car maker. It is also among the most well-known jingles ever written about any product. It went beyond the cars and pitched the fun, active and wholesome lives they represented. The campaign, which has been revived as recently as last year, represents an approach to brand marketing that probably would have seemed revolutionary in Draper’s day. And while this strategy is common today, advertisers continue to have a hard time convincing people to make deep commitments to brands."

The Wall Street Journal May 21, 2013 "Mad Men: Chevy Seeks Marketing Mileage from Vega Theme" "More than 35 years after the last Vega rolled off the Lordstown, Ohio, assembly line, Chevy may finally enjoy some lemonade.The company, which said it had no part in getting its brand onto the show, is asking its followers on Twitter to share their thoughts on how the lead character, ad executive Don Draper, will pitch the new car. In the latest episode he mentioned a big idea but didn’t reveal details. So, borrowing a line from the show, Chevy asked, “Do you have any idea what the idea is?” The company said it has received a steady flow of submissions and will share the best of them soon. In an earlier Mad Men episode the car was identified as the top-secret XP-887 prototype, which in real life developed into the Vega. With the troublesome car so distant in the corporate rear-view mirror it seems the company can finally begin to laugh – or at least smile — about the long-term damage it did to the brand."

The Daily Drive June 27, 2013 said, "Anybody who follows the Emmy-winning cable series Mad Men, which just concluded its sixth season, knows that the fictional ’60s advertising agency at the center of the show recently picked up a significant, but challenging, new account: a car known by its cryptic code name, XP-887. Anybody who’s a fan of postwar American cars (or anyone who follows Mad Men fan sites) knows that the XP-887 is the star-crossed Chevrolet Vega. As does any work of historical fiction, Mad Men mixes the imagined with the real. That explains how the never-was Sterling Cooper & Partners came to win the account for the strange-but-true Chevy subcompact. The recently completed season was set primarily in 1968 and, according to the storyline, Chevy has given SC&P a stringent schedule to follow into 1970, when the car will be launched. This matches up well with the actual Vega’s development timetable. In fact, the division had full-sized clay models of an early version of the XP-887 completed by late 1967; the photograph of the styling mock-up that appears atop this article is dated September 11, 1968. However, there was still a lot of styling, engineering, and marketing work ahead before the car the world would come to know as the Vega came to be. In real life, the print campaign for the first Vega—prepared by longtime Chevy ad firm Campbell-Ewald—started months in advance of the car’s September 10, 1970, showroom debut. A flurry of ads appeared even before the vehicle was named. The ads explained various aspects of Chevy’s plans for its impending subcompact. Without a car to show, they featured cartoonlike illustrations that portrayed the points being made in the lengthy text, but the type fonts selected for headlines and body copy would serve throughout the 1971 model year. The cartoon concept continued after the new car’s name became public in mid-1970, but the word Vega replaced the promissory “You’ll See.” in the lower right corner. Once the car was finally out, color photographs of the real thing supplanted the cute drawings.