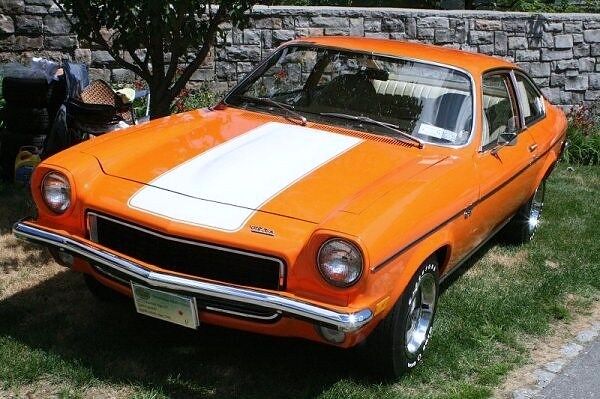 My 1973 Chevy Vega GT won big at the 2010 New England Concours D' Elegance presented by "Hemmings Motor News" July 17th and 18th in Vermont. The Saturday event, the Cruise-in Spectalcular was a non-judged show with winners selected by The Hemmings Motor News Staff. Winning vehicles were awarded glass trophies. The Vega won "Favorite Original."
The main event on Sunday, The Fourth Annual Concours D' Elegance was by invitation only and fielded 118 vehicles judged in 20 classes. The Vega, all-original with 6k miles, was postioned in Class O - Preservation. With 15 vehicles, the Preservation (Preserved Original) class had the largest field and the most diverse assembly of vehicles, ranging from a 1935 Packard to a 1975 Porsche 914.

My 1973 Chevy Vega GT won "Best Preservation" beating the second place 1969 Chevy Impala Custom Coupe. Second place winners of each class recieved glass trophies; the same type awarded in Saturday's "Cruise-in Spectacular." First place winners were awarded a distinctive round, solid glass trophy.
In Sunday's awards presentation parade, mention was made that I had driven the car 300 miles to the event, a seemlingly positive factor in the eyes of the Editor in Chief of Hemmings; another plus in favor of driving instead of trailering to an event!
The next largest was Class AM-1 - American Muscle 1964-1974, fielding 14. Class V - Corvair, fielded 11 vehicles, with the other 17 classes each fielding 10 or less. Photos of all the winning vehicles appeared in the Hemmings Motor News Oct. 2010 issue.