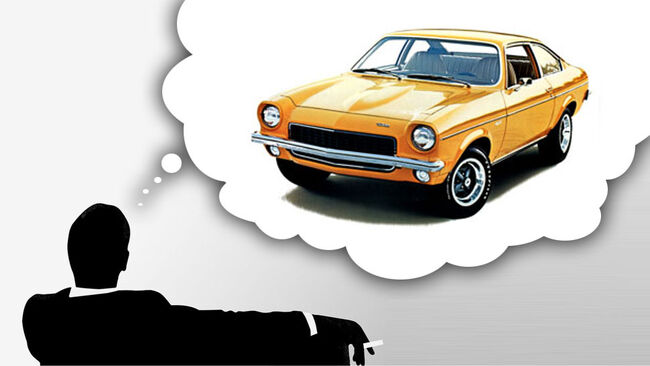 Car fanatics have a reason to wait for the final season of Mad Men” AMC’s Emmy award-winning television drama which follows a fictional New York advertising agency in the late 1960s because It looks like Chevrolet and its cars, from the Camaro Z28 to the coming compact Vega, will continue in their supporting roles. In Season 6, set in 1968, Don Draper lands an account with Chevrolet to promote its upcoming “top-secret car,” the XP-887, the internal name for GM's corporately designed subcompact that would come to be known as the Chevy Vega. Don summed up Chevy’s hopes for the new design: “It’s totally new. They know there’s been nothing before Mustang and nothing after it, but they’re hoping it’s this.” Ted said in a later episode, "They let me see the clay model, and it's no dog" with Don's reply for Chevy to call him in 1970 when they're ready to make an ad. For an advertising firm like Sterling Cooper Draper Pryce, the Vega would have been a gold mine potentially worth the risks the shows characters are taking to get the business. Compared with Jaguar, the fictional firm’s previous big auto account, Chevrolet sold more Vegas in a few months than all the E-Type Jaguars sold in more than a decade of production. Chevrolet sent two tweets last night about the show, although the automaker has no official link or partnership with “Mad Men.” Chevy first tweeted asking fans to speculate what ad Don Draper, founding partner will create. Will the car play a big role in future episodes? Will we get to see the XP-877 – perhaps as a clay model in GM’s Warren, Mich. design center? Possibly. Will Don Draper cruise around town in a Vega as he did in the Jaguar? Not likely, as the XP-887 was announced in 1968, but advertising started in May 1970, a month before the car's name was released and the first one rolled off the assembly line. The most we can hope for is a clay model or prototype, unless the final season advances an additional year. In real life, Chevrolet had a 90-year relationship with Campbell-Ewald, the ad firm behind "baseball, hot dogs, apple pie and Chevrolet" and in their day Vegas sold like mad, with Chevrolet producing nearly 2 million in seven years.